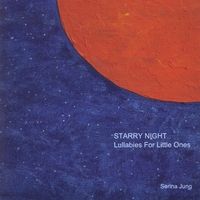 From the recording Starry Night: Lullabies For Little Ones

Story:Moonlight was first recorded a capella on my first cd, SERINA JUNG, back in '99. I thought it was inspiring enough to put on this cd because so many children are afraid of the dark or nighttime. I know I was, as a child. That the moon should be considered a friend in the dark also repeats in the song Orange Moon - different words, of course :)

Moonlight Casts a Shadow
(c) 2010, Serina Jung
Moonlight casts a shadow did you know?
I saw it, I stood in it
I had been feeling like I was in the dark
suddenly, I was bathed in silver light

I watched the moon glide slowly across the sky
I followed it, I traced its path
I had always thought that only the sun could shed such light
how I yearned to be able to touch it